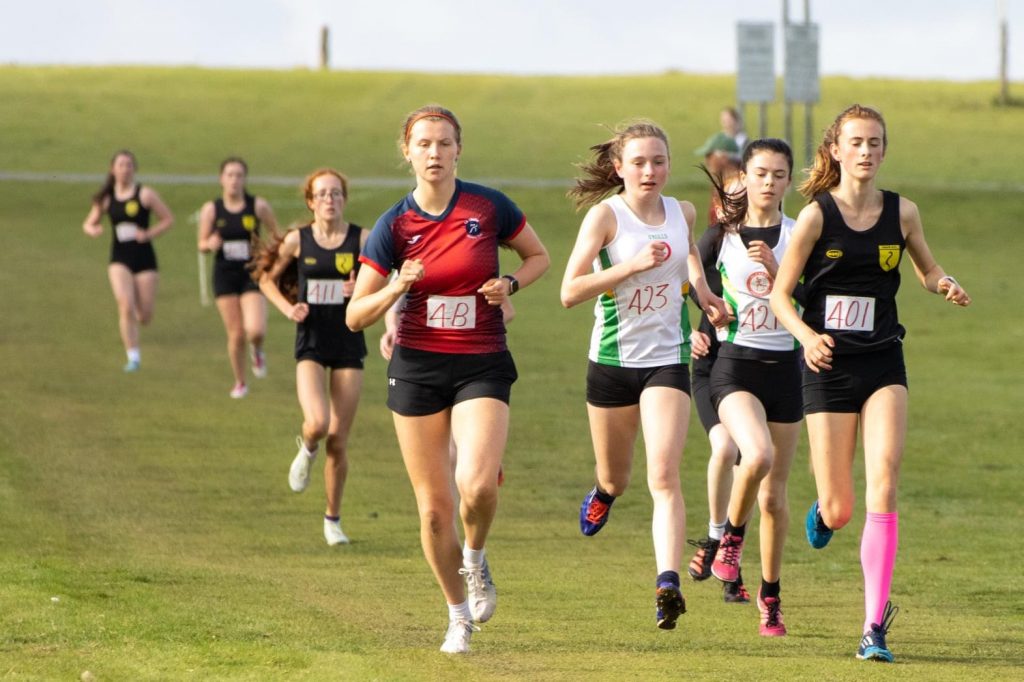 Scroll down for all photos…

A fantastic 143 Naas AC athletes gathered at various starting lines around the Curragh course over two weekends in October. For some, in particular our youngest, their first taste of cross country racing, others were old hands delighted to be back in the fields again for not just one race but two! Everyone ready to give it their all and give it their all they did!

We have 7 newly crowned County Champions, 8 individual silver medallists and 10 individual bronze medallists. One of the great things about Cross Country racing is the team event – here our athletes brought home, 7 team golds, 5 team silvers and 8 team bronze medals. An absolutely fantastic haul! Trailers were ordered to bring them home and in some houses planning permission requested for trophy cabinet extensions!

Our U10s were the first athletes to try out the course and what a job they did giving us our first County Champions this season, Sophie Geraghty and Harry Kennedy. Sophie scored along with Aoife Gallagher, Anabel Crowther an Amelie Moreau for the team bronze, Harry scored with Cian Clerkin, James Holland and Hayden Taffe for team gold.

The U12s raced on with another County Champion being crowned, this time Siah McManus also first scorer along with Caitlin Wilson, Emma Wilde and Emily Behan for team bronze. In the boys’ race, Fred Dick powered home for the silver and along with Patrick Gordon, Cuan Og McAoghan and Tom Horan scored for the bronze team placing.

Next up were the U14s all the girls ran gutsy races with Emily Gallagher, Isobel Kearns, Leah Tisdell and Ruby Cowdell scoring to secure the team bronze.

U18 Girls produced another County Champion with Lucy Jacob taking the crown in spectacular fashion! Team mate Caoimhe Dempsey took the first of her individual bronzes. 2 team medals for this group with Team A Lucy Jacob, Caoimhe Dempsey, Aoife Dempsey & Pia Hayes taking Gold and Team B Caoimhe Gavin, Caoimhe Johnson and Emma Tisdell all running up an age, the team bronze.

Novice and Masters rounded up the day with titanic battles with races within races!

Women up first and Ruth O’Loughlin powered home to individual Novice bronze and bronze in the M2 category, Sarah Kearns taking the M3 individual Gold and Ann Marie Feely taking the M3 bronze. The 3 scoring for the masters team bronze.

A blistering men’s Novice race saw Daniel McEntagert rewarded with individual silver and Brian Kennedy bronze and along with Breen McManus and Frank Sherry bagged the team gold too. ​​​​​​​

Breen also won the silver in the M3 and Brian in the M2. Joining them in the medal race Barry O’Connell took the bronze in the M3 category.

A new day and ‘the going’ was soft and the cross winds strong but the sun still shone!

First up were the U9 groups and our youngest athletes. They were determined to keep the medal streak going and to inspire the groups racing after them. Max Drennan raced to individual silver and scored along with Matthew Holland, Luke Hynan and Oscar Ross on the gold winning team.

U11s and Niall O’Connell clinched the individual bronze and along with Shane Tisdell, Cian O’Neill and Mark Madden scored on the bronze winning team.

A race and a half was up next with the U15 girls. Holly Headon, in her first cross country, took the individual bronze and along with team mates Isobel Kearns and Caoilinn Dempsey have the team silver gone home in their pockets!

U17s and Sean Behan ran a race of pure guts. Running up an age and leading for the majority only being taken 100m out from the finish. A silver medal rewarded him for his efforts.

U17 girls and 2 teams lined up and gave the 4km everything. Team A taking the silver – Caoimhe Gavin, Roise Hennessy, Emma Tisdell and Caoimhe Johnson and Team B taking the bronze – Emily Kearns, Sarah Clancy and Megan Keogh.

Leading from gun to tape in style, Sarah Rowland was crowned the U19 County Champion. Caoimhe Dempsey taking another bronze, both girls along with Aoife Dempsey also taking the team gold.

Powering around the course rewarded Niamh Johnston with Intermediate Silver, Caoimhe Dempsey her 3rdbronze medal of the championships and along with Aoife Dempsey and Kate Coffey the team gold!

Daniel McEntegart was back for his 2nd day in the field, this time in the intermediate race, a leg zapping 6km. Daniel ran strong and took the title! Daniel also was the first scorer on the silver medal team along with Adam Byrne, Frank Sherry and Barry O’Connell.

An absolutely brilliant Championships, our thanks go to all the coaching team for having the athletes so prepared, the parents and families who brought the athletes to race and to the athletes themselves for providing us with scintillating racing!

A thank you aswell to all the County Board, officials and volunteers who worked tirelessly to ensure that the Championships could take place.

Next up in cross country we’re off to Kilkenny for the first of The Leinster Championships!